The Adventures of Tintin

Intrepid reporter Tintin and Captain Haddock set off on a treasure hunt for a sunken ship commanded by Haddock's ancestor. 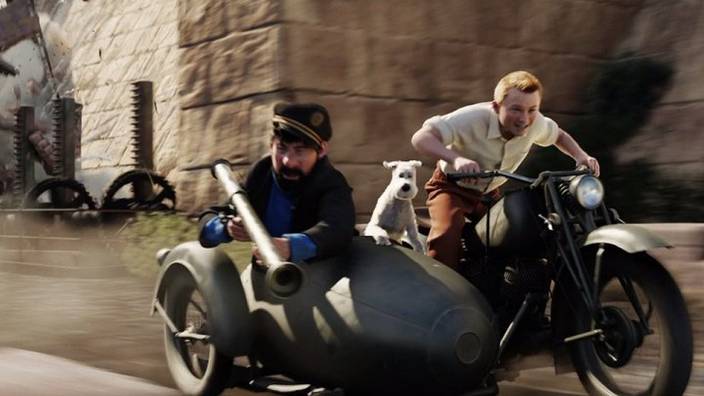 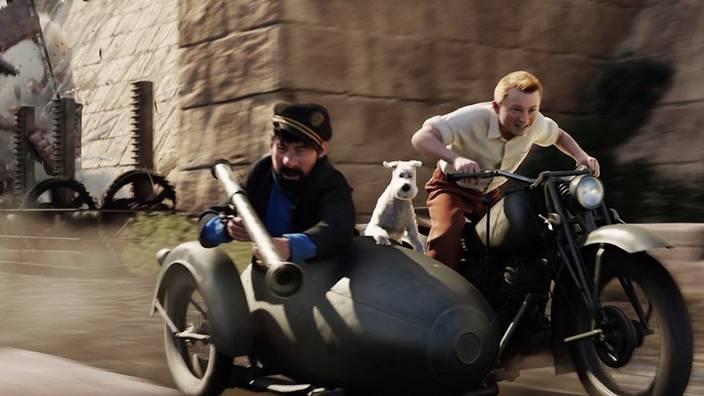 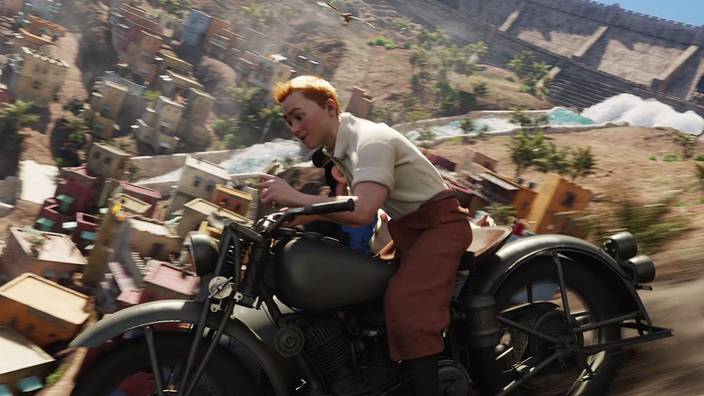 I think this is a computer-generated generic motorcycle. I saw an interview with Jamie Bell who plays TinTin and he said the whole movie was shot in a studio in NZ. Most of what you see is CG. The whole movie is CGI. But since car models look like real ones, the bike could be made after a real one... or not I hate CG movies! They are not even movies! Tomorrow, they will make movies with CG actors! The actors are already CGI in this movie. Disgusting!

I don't think it's a BMW. The engine looks more like a straight twin rather than a flat twin/boxer found in a BMW. Yes well the Wheel cover, length of the front forks, headlight, and the gas tank all match a BMW R75 http://motorbike-search-engine.co.uk/classic_bikes/1943_bmw_r75.jpg What other likely possibilities are there other than the BMW R75?

First, it's not a real motorcycle, it's a CGI motorcycle. It could be based on a real motorcycle, or a made up motorcycle designed by the animators. It looks like a Harley-Davidson WLA as much as it looks like BMW R75. You need to wait a few months until it's released on DVD. This website says it looks a lot like a 1960s Triumph http://answers.yahoo.com/question/index?qid=20090506173224AAYF0Rt There you have it, comics. NOT animation movie. Moreover, it was written three years ago. Can't say you paid much attention to detail, no offense. Oops sorry my mistake, no offense taken. My guess is a BMW R75 with modified forks, and a Steib S500 sidecar. It also looks close to a Gnome et Rhone AX-2 http://users.telenet.be/FN.oldtimers/pict%2024%20to/M%20%2012%20SIDE.JPG but the engine doesn't match that either.

So currently the closest thing I can find is the Arial WNG 350 http://www.roncobb.com/Graphics/Ariel-WNG-2.jpg any other thoughts? Yeah, that looks closer to it than a BMW R75. I just saw the movie, and the engine is definitely a V-twin, not a parallel or a boxer. Thanks maxman, that will held enable us to identify it. BTW I don't know much about Tintin, but I think it takes place in France (?), that might also help identify it. Better Picture with Real HD

I think this part takes place in North Africa if it can help you Tom11 With the new pictures it's easy to tell that it's a 1941-1943 Indian Model 741. Where it takes place is usually not relevant, it is where it was filmed which helps (and if it is CGI, it does not help at all) It actually takes place all over, but Tin Tin lives in England, and this scene was in North Africa. Do you feel the same way about cartoons? Because that's basically what this amounts to. 1. We must make the difference between cartoons and CG movies. 2. I have nothing with cartoons, but I don't have the right age for them anymore. Motion capture is a form of digital animation, but based on actual actors and props. In other words, the actors are real, but animated to look closer to those charaters. I know, but I like more to be 100% real. Everything: actors, cars, objects, streets, buildings, landscapes - everything. Morocco is in North Africa. MAN, I have to brush up on my geography. Actually, you can tell in the main picture that the engine is a V-twin.

I used to think this film was made by the same animation studio behind The Polar Express.