A film that explores the dark and miserable town, Basin City, and tells the story of three different people, all caught up in violent corruption. 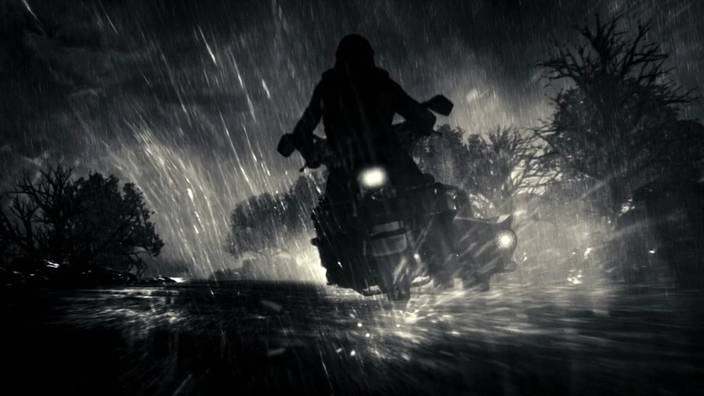 This is a Police bike, so maybe it's a Kawasaki. This really should have been identified by now. It's an American police bike and they always seem to use the same kind of bikes, so what is it? How can you say it should have been identified by now? The pic is dark and very little of the bike's figure can be properly made out. I suppose it could be a Harley, as I think if I remember right, it sounded like one, but that is just useless input by me.

Kawasaki KZ1000 Police? http://svsm.org/albums/kawasakipolice1000jh/DSC07561.jpg Typical Harley cop bike for comparison: Looks like it, yes. "...as I think if I remember right, it sounded like one" Exhaust note was likely to have been added in post sound design. The Harley that Dudley's posted doesn't look like this bike, look at the thumbnail, the molded windscreen thing at the front (I don't know much about bikes), looks more like the Kawasaki. It is a Kawasaki for sure. Aren't these bikes always labeled as "Kawasaki Police 1000" on the site? THANK YOU, ford guy. Err...you're welcome I remember Dwight saying that in his opinion, that the cop on the bike is one of the few straight ones with a family and "a stiff working mortgage" No, he contemplates either bribing or murdering him, but mentions there was the possibility he was one of the few honest cops. Yes, but he also said about the other cop who chased him earlier when he was following Jackie Boy into the Old Town section. It's a kz1000p it has the boat trailer tail lights and you can see it better when he pulls up along side.

Unidentifiable without the thumb which is now a dead link.