The lives of two mob hitmen, a boxer, a gangster's wife, and a pair of diner bandits intertwine in four tales of violence and redemption. 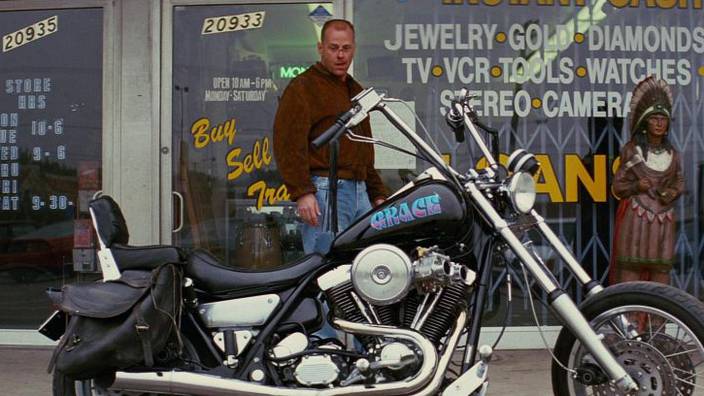 Zed's chopper (not a motorcycle ) It is a Harley-Davidson. I don't know which model this is based on ... and Zed can't tell us anymore Modifyed Harley-Davidson FXR Super Glide (1986-93) It has unique shape frame pipe and side cover. http://www.motorweb.nl/imagesads/10410.jpg Zed's dead, Zed's dead baby. Maybe "The Gimp" can tell us Actually, two Harleys were used for this bike. And they were not identical. A real observer can tell the difference. Anybody? Well I'm late to the part by about 8 years, but I see the difference. The first time the bike is shown it has a twin barrel Weber carb sticking out up front. Later on in the next scene is has a stock air cleaner cover with what I would assume is a stock Mikuni carburetor. The weird thing is that the stock air cleaner cover is on the bike when the dual throat Weber is in front of it. That carb sucks air in from those two stacks sticking out of the front. I'd love to see pictures of the bike that aren't screen shots from the movie. Shed some light on this FXR. I love me some FXRs

Well I'm even more late , You're right This FXR has a dual throt dell'orto or weber (pretty much the same) but the second version sports a rivera engineering 4 valves head kit with 2 mikunis,one on each side (or Keihin CV i Can't tell) the round stock evo air cleaner cover on the dell'orto is just here to look like the other version of the bike and is useless ...