Prick Up Your Ears

Stephen Frears directs this biographical drama focusing on controversial British playwright Joe Orton, revealed in flashback after his murder by lover Kenneth Halliwell. Born in 1933 in Leicester, in the English Midlands, John 'Joe' Orton moves to London in 1951, to study at RADA, and enjoys an openly gay relationship with Halliwell in their famous Islington flat in the 1960s. However, when Orton achieves spectacular success with such plays as 'What the Butler Saw' and 'Loot', Halliwell begins to feel alienated and the pair's future looks increasingly uncertain. 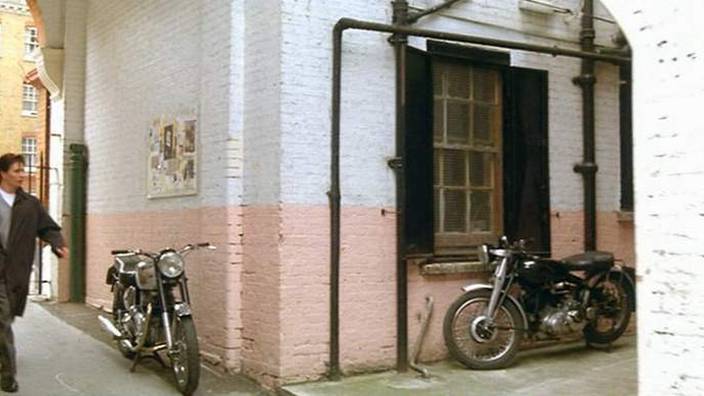 Both seems had modifyed/restored. Right is Vincent Black Shadow (1948-54) Left is not clear, but may looks BSA Goldstar for me. Is it a 1000 V-Twin or a 500 single? This identification was hesitated very much. Parts colors are strange & there are some suspicious points. But case cover dosen't match if it's 500 single, and it has postwar alloy front fork. So I put the name & year as Vincent Black Shadow (1948-54)... single (Comet) http://www.thevincent.com/comet-c-lside.jpg Vincent Series C Rapide (lightly modified) 1948-1954. Can not be Comet (500 single) as primary chaincase is different on the two engines. Note flat 'bowl' behind footrest for Vincent clutch of twins rather than smaller Burman clutch. I think Rapide: lower engine is not painted black. Heat diffusers may be black here from swapping from Black Shadow, or just dirt and poor resolution photo. Forks have been stripped of black paint and headlamp attachment has been made up. May have larger Black Shadow speedo, but could have been retrofitted. The bike on the left is a Royal Enfield twin of 60s vintage - looks like a 1960 Constellation 700 - chrome tank, single carb

Twin Monoblocs on Constellation for the 1958 London Show and thereafter, as I recall. The Super Meteor, marketed for sidecar use, had a single carburettor. In fairness, the Enfield should have equal billing here. Just because Phil Vincent's machines were designed 'to last for ever'. (We hope the Database does as well).