The movie is centered around five friends as they end up spending the summer of 1962 shackled up together in a tiny studio apartment in Tokyo. The five friends are Eisuke - the manga artist, Shoichi - the singer, Ryuzo - the novelist, Kei - the painter and Yuji – the 5th wheel (?). The friends spend the summer in pursuit of their own ideals of personal freedom - being able to do what they want. In the process of pursuing their dream they learn firsthand that however ideal it may seem, its not as easy as they think. 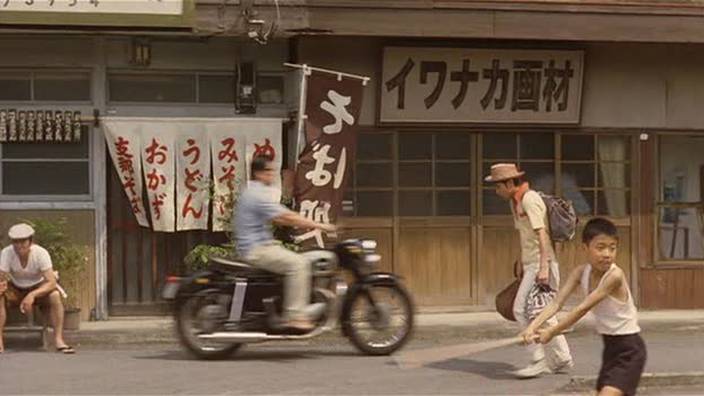 fuel tank looks BSA, but the rest triumph? More likely a Chinese confection?? I think this may be a Kawasaki W650, made in the years 2000 and 2001. The color scheme is right and I think the kick start is visible in this viewthe new generation ("modern classic" as they call it) Triumph Bonneville has NO kick start. This was Kawasaki's tribute to the classic Triumph, BSA, etc. British bikes of the 1960's. It was a great machine that I love, but no one else didthey did not sell and was soon gone forever. I have seen used ones on e-bay but I will stick with my real deal Triumph Bonneville thank you made by our former enemies in a London suburb. (Most of our friends in the US were former enemies--such is life).

It's not a Kawasaki W650, those have discbrakes. It could be a Kawasaki W1 from mid '60 (a BSA A10 clone), but those usually have chrome mudguards. This one seems to have painted mudguards, so it appears to be a BSA A10 from mid '60's after all. (Also the tankbadge is more similar to BSA than Kawasaki)