Indiana Jones and the Kingdom of the Crystal Skull

In 1957, archaeologist and adventurer Dr. Henry "Indiana" Jones, Jr. is called back into action and becomes entangled in a Soviet plot to uncover the secret behind mysterious artifacts known as the Crystal Skulls. 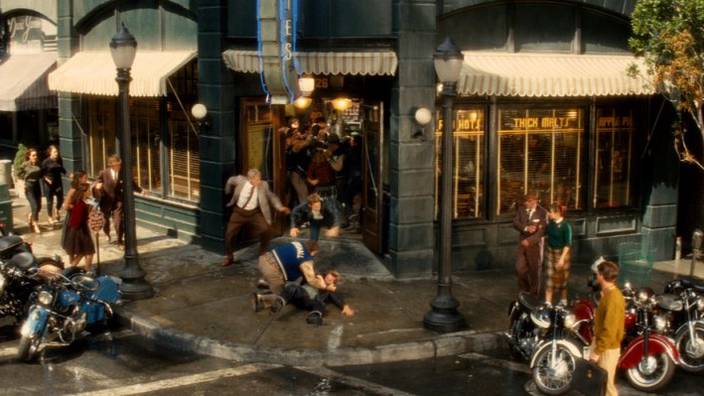 1st on the right seems the most interesting to me ... nothing for the dustbin on the right: Norton Atlas, Indian Chief (red fenders as is also the blue one on left) and a Vincent Comet C

That is not a Norton Atlas, it is a Norton 88ss that has been kicking around Hollywood for the last few years. The Atlas was not offered in two-tone paint and did not come with a siamese exhaust system. I have three 1962 Model 88 Nortons along with several others of various years. 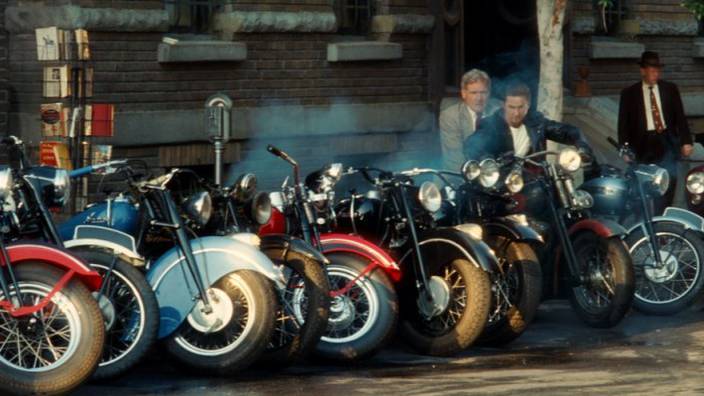 The red one on the left is a just pre-WW2 Harley-Davidson. The next one with the chrome strip on the headlight is aa early 1950s Triumph Thunderbird. The pale blue one is an Indian Chief from post WW2. The black one next is too obscured but is possibly something British. The red one next looks like another old Harley but appears to have a disc front brake. After that are two more Indain Chiefs. The one being ridden appears to be the modern/old Harley that we have already identified. And a red 1950 Studebaker. The one on the far right is a 1937 Harley davidson U Eather a Studebaker Champion or Studebaker Comander. The Studebaker should get it's own page.

If they could get period-correct Harleys, why didn't they just acquire an FL Hydra Glide for Mutt's bike? 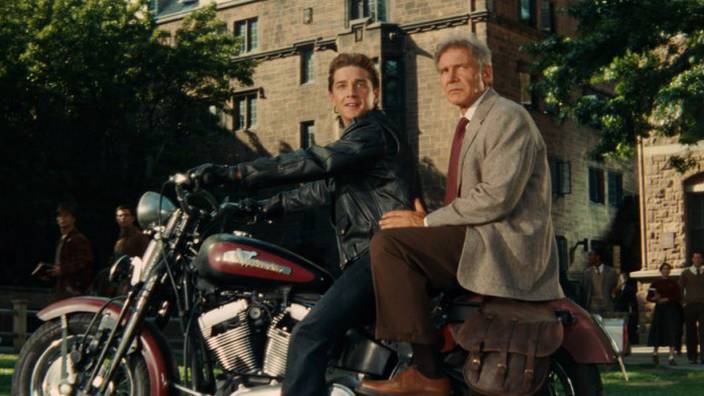 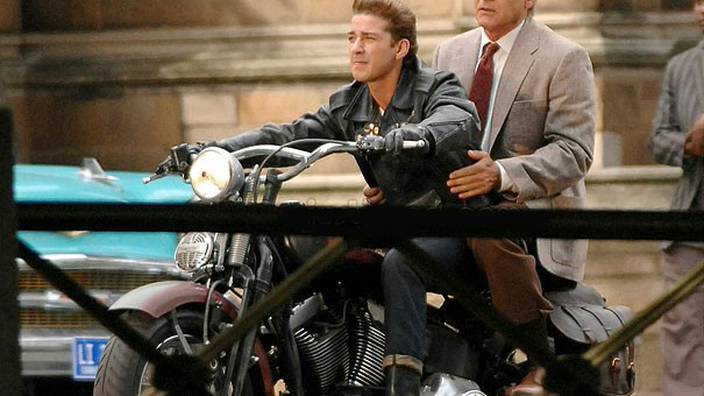 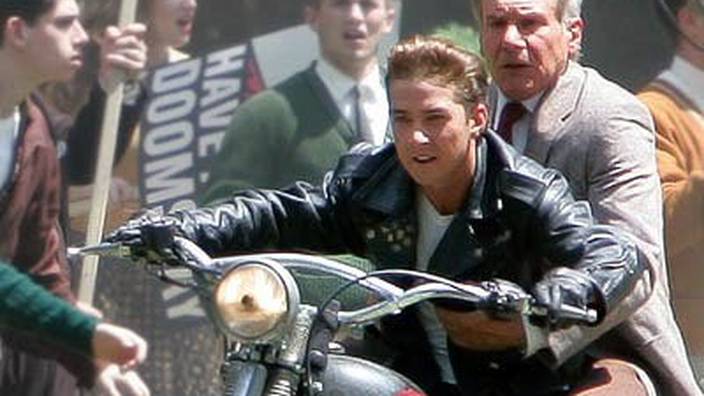 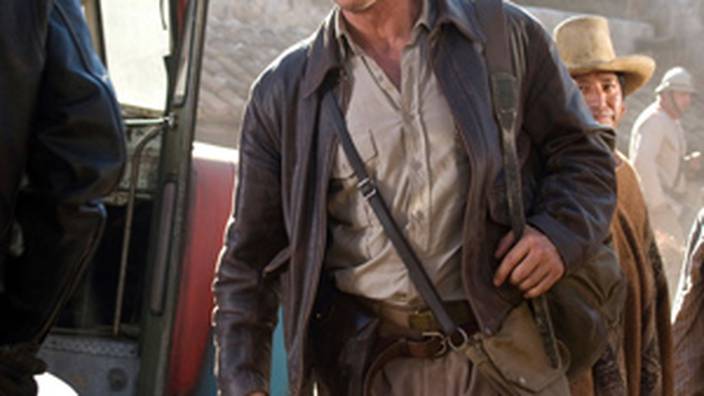 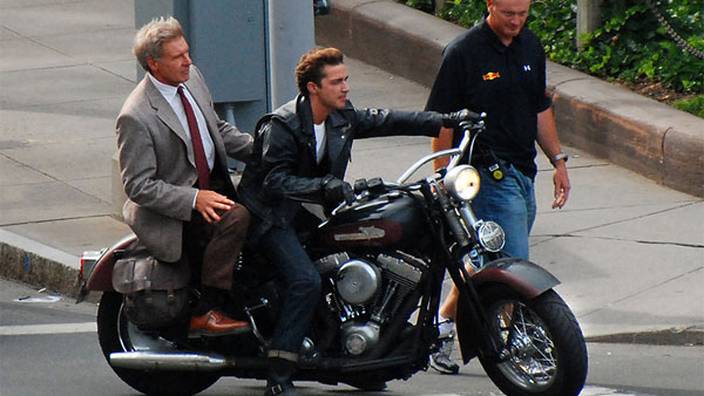 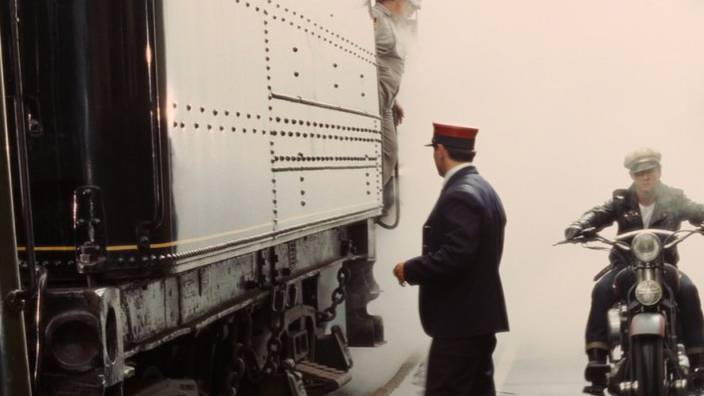 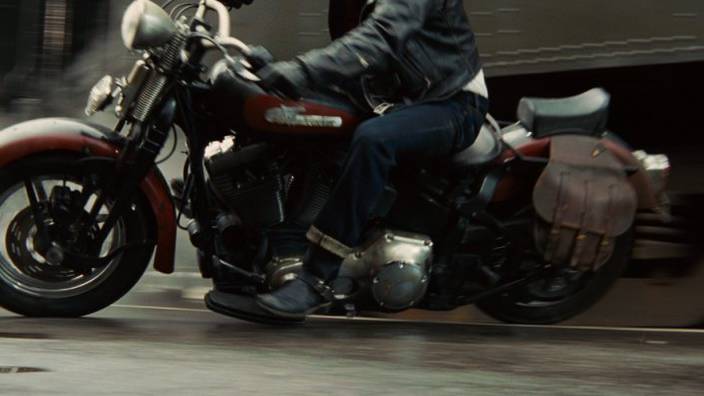 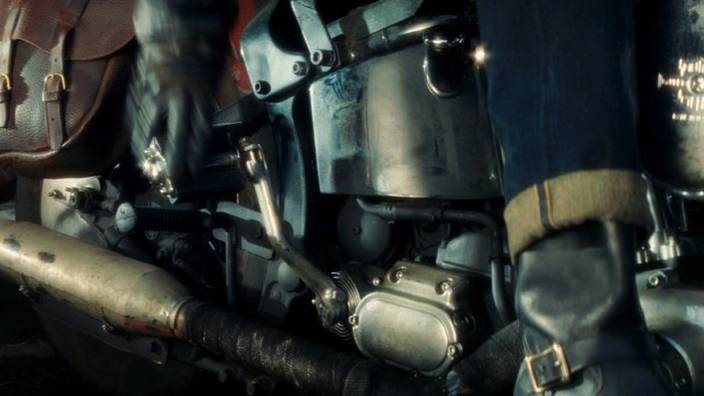 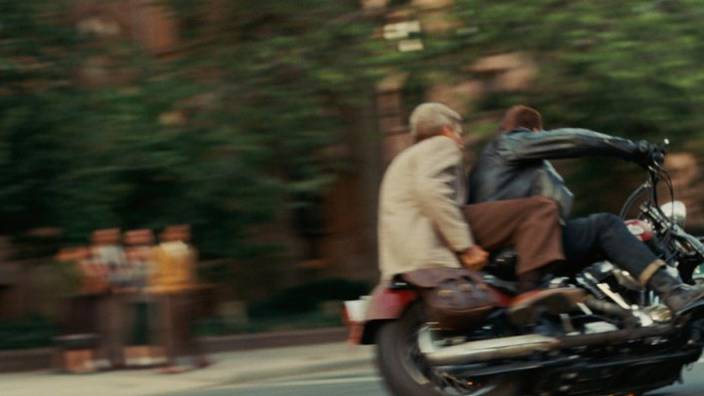 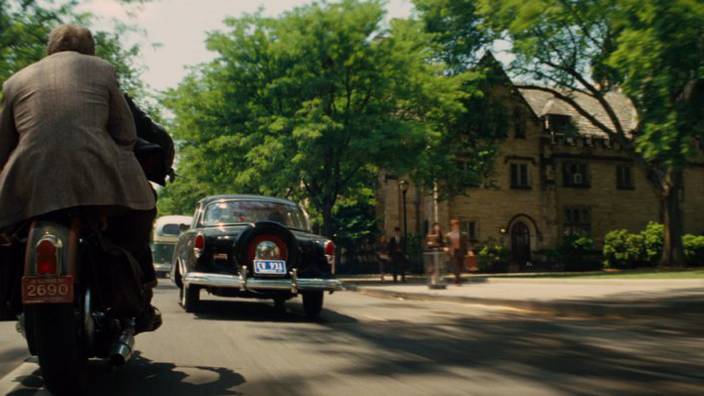 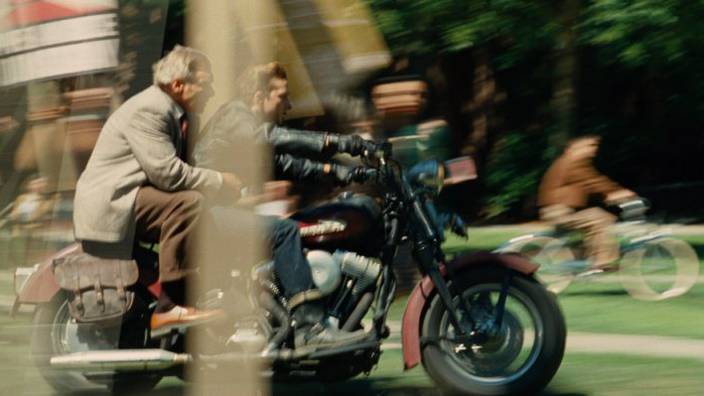 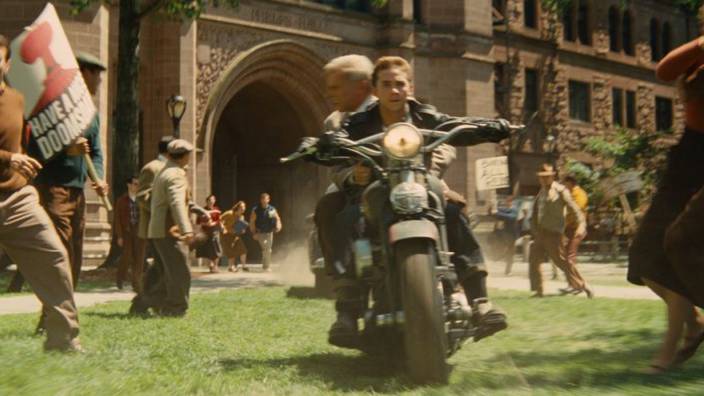 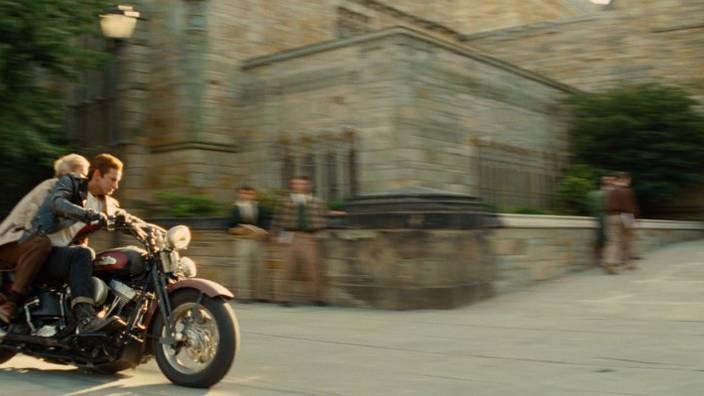 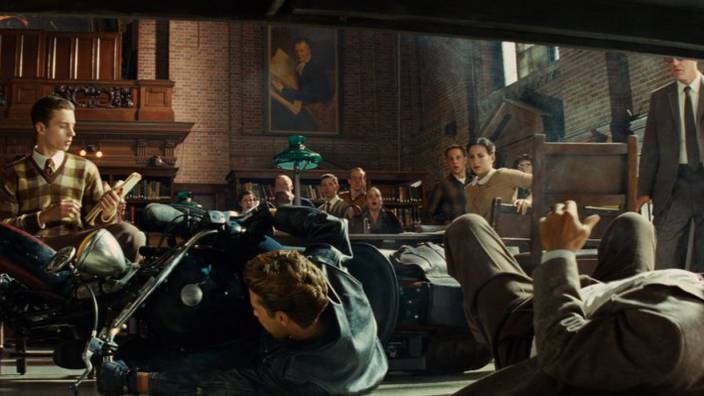 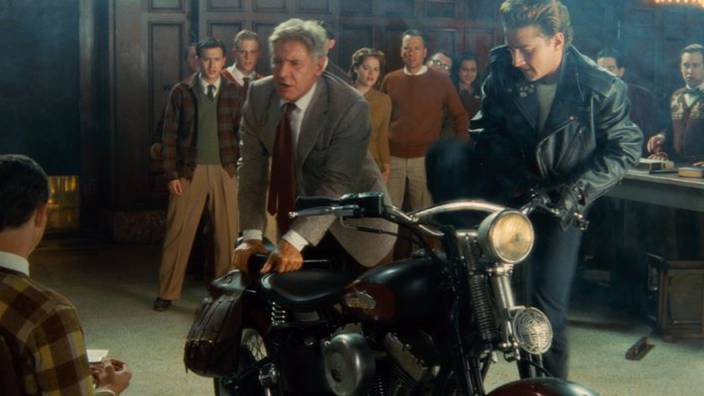 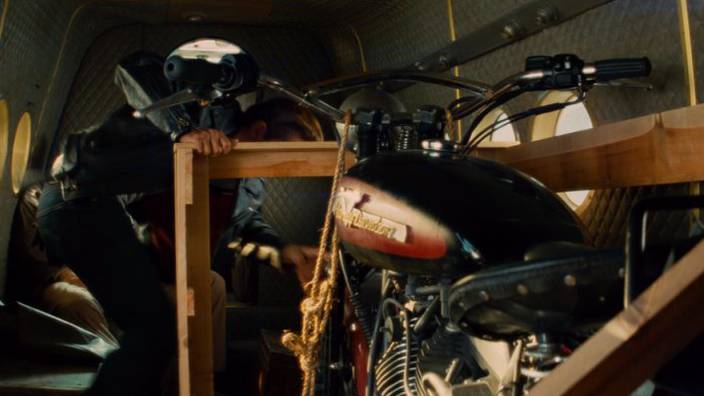 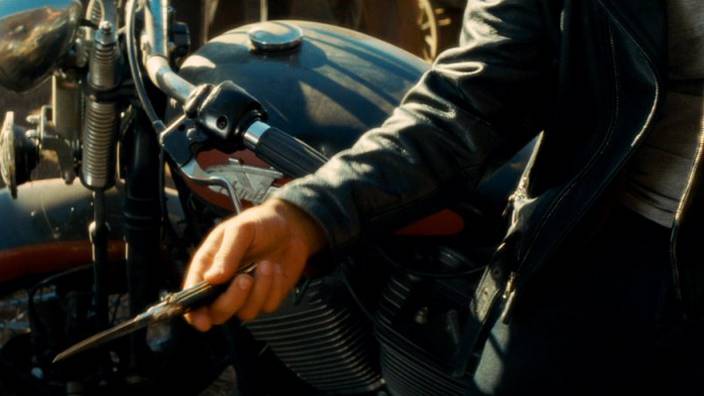 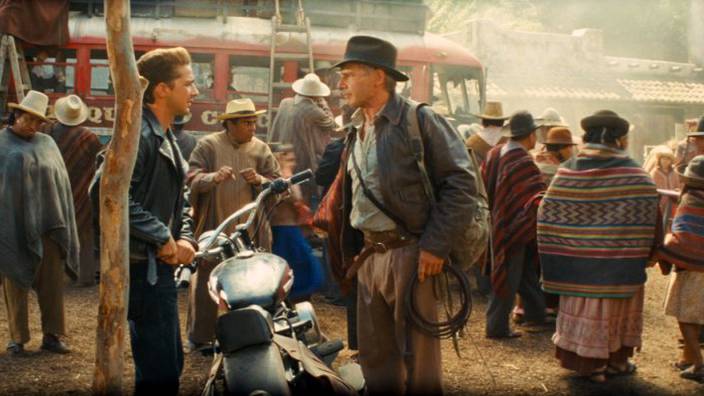 Harley-Davidson This is a late model FXSTS Softail Springer modified to look like an older model - it has a 'twincam' engine so it is at least 1999. The most obvious changes are the addition of a kick starter (not seen on a Harley since the late 1960s) and a plate covering the rear disc brake. The bike still has its front disc. As long as it is always shot from the right you can't see the belt final drive. The fuel tank is also different from stock. Some extra pics: Four stars is more likely Press releases are stating that the motorcycle Mutt rides is actually a "2007 Harley-Davidson Softail Springer Classic customized to reflect the movies 1957 period setting". Link to "www.harley-davidson.com" But it isn't, as you can read above. That's because it was modified to look like a '50s Harley. This is quite an epic failure on the filmmakers' part. A casual viewer wouldn't notice the anachronisms, but I've seen and read about Harleys for quite some time to tell they did it wrong. If they didn't have the budget or time to have a Panhead custom-made they could've at least replaced the cam and valve/rocker covers with Panhead-style ones. Xzotic Cycle Products sells retro-esque ones for the Twin Cam and Evo engines: Link to "www.retrocycle.com" Link to "cyrilhuzeblog.com" Link to "www.robscyclesupply.com"

Or they could have rented an appropriate Panhead. 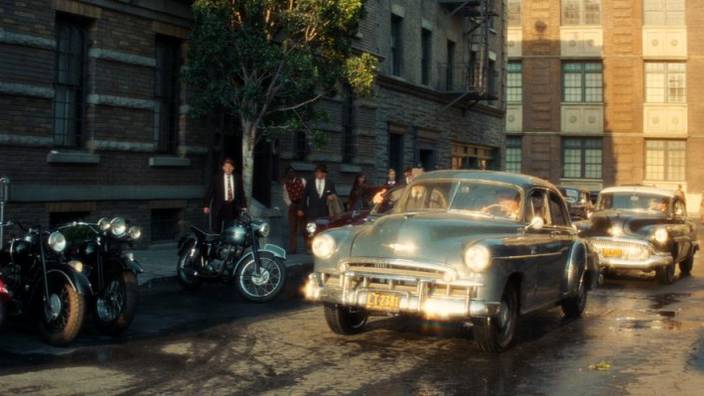 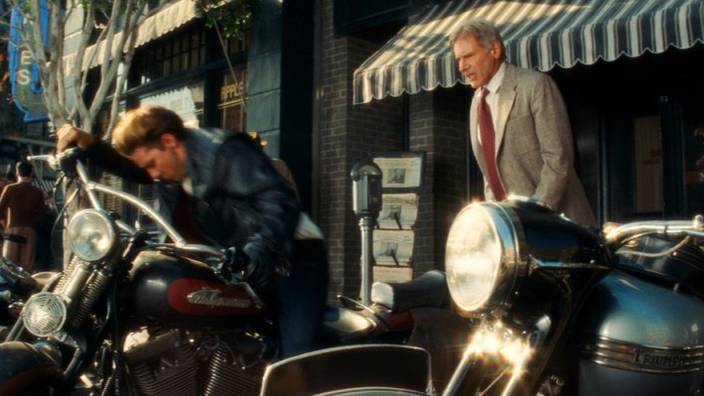