Doctor in Clover is another 'Doctor' movie, but this time Leslie Phillips is the main doctor in the story, looking for love and romance from the hospital nurses, much to the annoyance of the main Administrator (James Robertson Justice) who wants his doctors to be 100% focussed on the job. Numerous antics follow, with Phillips getting Justice fixed up with the new prim-and-proper Matron (Joan Sims) and his attempted failures to lure the hospital's beauty, the physiotherapist. 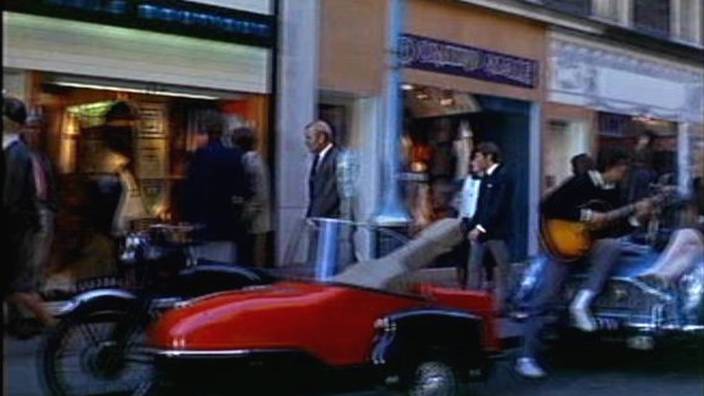 This is a Vincent from about 1948-54. From this side we can't see whether it is a single cylinder Comet or a twin cylinder Rapide. Don't know the make of sidecar.

I think that this is a series C Rapide or Comet 1950-1954. The bike appears to have girdraulic forks rather than Bramptons, dating it as post 1949. Second piece of evidence for making it series C: the seat seems to have two sections like the earlier Feridax model, rather than the single hump of the un-enclosed series D. It is unlikely to be a Black Shadow as it does not seem to have the 5 inch speedo in the centre of the bars, though it is to be noted that by 1966 anything could have happened to the bikes. As a final guess I would say it was a Rapide as the Comets were often seen as not man enough for a sidecar, though both occurances are still around. So to sum up, Vincent Series C, Rapide or Comet.