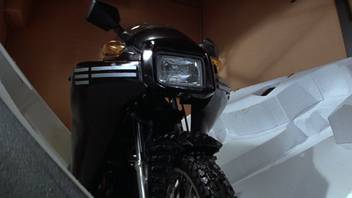 Could it be by chance this motorcycle that inspired the Tonnerre Mécanique series?

It should have 4 stars. Wasn't it used just shortly for the chase? Yes, but it's owned by Bond. Ok, I agree, 3 stars, but what truck was it where it drove in and then off from truck? Well I loved the car & motorbike chase. It better then the Tomorrow Never Dies when Bond was in the BMW motorbike without gadgets. Here in this movie he got gadgets in it. Which His Aston,Lotus or BMW could'nt compare or do a stunt like that.

I prefer his Yamaha to his cars. 4 units were used in the scenes. Adaptations for the movie: - Repainted black - drop-on rear bumper against pushing - rocket thrusters allowing him jump over riding car(Camaro) or over the water gap. DOes anyone know where they are now ? Warner Bros was possible owner or loaner... Most Google results call it Seca Turbo, not the other way around. Q's little gift for 007, which he uses to chase down Fatima's Renault. .. and has a cool rocket launcher in the back..

Hi my dad purchased the bike and the back ups 6 or 8 in total after filming as he supplied a few vehicles for this film at the time including the gold Mercedes and was offered the opportunity to buy them so he did. He kept one for many years after and sold the rest . 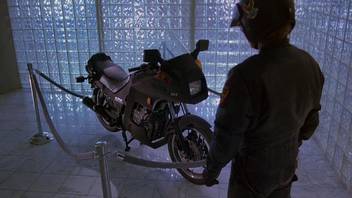