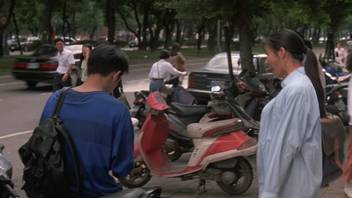 It's a Yamaha, by Google translation, name seems to be Youth Music and it was the predecessor of another Yamaha scooter known as the Ride: http://4.blog.xuite.net/4/c/2/c/12606956/blog_40138/txt/11666962/17.jpg Link to "www.google.de" Here's the Ride: Link to "www.google.de" The name seems to be Yamaha 兜風 (doufeng) by looking at the ads. Also known as Yamaha Champ? I thought 兜風 was Ride? I replied to your un-edited message. I didn't notice the edit until now. I thought they were the same model. So what is it now? For other Chinese-name vehicles we just write the transliterated name rather than the translated words, ex: /vehicle_814253-Dongfeng-Xiaobawang.html So, Yamaha Qing Chun Le? Then this: /vehicle.php?id=503036 should be called SYM Feng Dong 50. Personally, I think the translated names are better.

It's tricky. If we choose to keep the name on IMCDB as close as possible to the real one, I believe that the use of the transliterated form of the word is a better choice than its actual meaning in English.