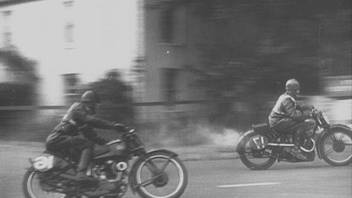 Of course this picture is mirrored, look at the numbers! So we are looking at the left sides of the bikes (the primary drive side) which makes it very hard to distinguish what kind of engine they have. Looking at the nice exhaustpipes of bike No. 17 I guess it is a 250 or 350 from mid '30s as those pipes were the fashion then. The tankbadge looks like Ariel, but it could very well be a Triumph or BSA. The bike with No. 16 could be a Velocette (KTS? look at the oil pipes to the cilinderhead) from mid 30's if I look at the tank and badge. After looking at the other picture that features the bike with number 17 from the right side, I think it is probably a Triumph T80 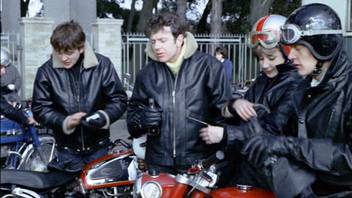 Soit une Viper (350cc) ou une Venom (500cc). http://www.vintagebike.co.uk/pictures/velocette-viper-1955/ (Viper) http://auto.howstuffworks.com/1961-velocette-venom.htm (Venom) Si vous voyez la différence, vous êtes (bien) meilleur que moi! Est-ce un cas semblable à celui de la Honda CB72/77? La couleur rouge du réservoir d'essence ne fait pas très « Velocette ». Repeinturée? Bit of a lie that all older British motorcycles were black ! This Velocette reg 302BTX has that horrible fibreglass covering engine , yuk . Another pic with that rare Panther 2 stroke - From Wikipedia: "the Viper had a lot of chrome plating and was offered in a choice of black or "willow green" paintwork" "the Venom had high quality chrome plating and was finished in black paintwork with gold pinstriping" Having looked at many photographs, I've seen both the Viper and the Venom sporting the same chrome and paint tank (it seems much smaller than the fully painted one and has a different shape), It's the tank on the subject bike. As for the red colour, I haven't found any data as to what was really availble. Since these bikes were hand-built (and in low numbers), I suppose many possibilities existed to purchase a "one of a kind" model, Also, BOTH models appear to have been offered with the ugly fibreglass enclosure. I think one has to be a serious Velo afficionado (being British is also a plus) to be able to fully understand the idiosyncrasies of each model and of the marque in general. Same for practically all of the other brands of British bikes of the period. I believe Brit bikes were aimed at the connaisseur while the Japanese knew they had to appeal to the masses to succeed ("you meet the nicest people on a Honda"). So, since I'm not British and/or a connaisseur, I'm not able to diferentiate between the various incarnations of both models and thus, am unable to identify the subject bike... I'll leave that to the "experts"!

This is red with gold pinstripes ?