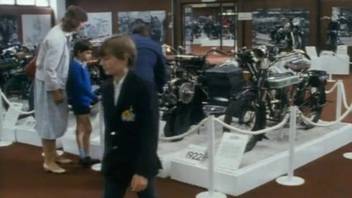 Seen in scenes set at the National Motorcycle Museum in Birmingham. The only 1922 bike listed as an exhibit now (25 years later) doesn't look too close to this one... It's your turn to hurry up and check the museum and its exhibited vehicles I believe this museum had a major fire a few years ago so many of the machines seen here will perhaps have been destroyed? This one might be a Triumph - maybe a Model H? A propos burnt down collections: @walter: don't read that: Link to "www.oldtimer-markt.de" Re ingo's link. I don't read German but I did pick up enough from it to understand that it refers to the fire in January of this year which destroyed the von Raffay collection. I read somewhere that the value of the machines lost was estimated at around 20 million euro. I know the collection included many rare and one-of-a-kind cars that are irreplaceable. Some of these had been restored here in NZ. He owned quite a few pre-1905 cars that his family had owned for many years but whether they were lost in the fire I don't know. http://news.bbc.co.uk/1/hi/england/3114410.stm Douglas? 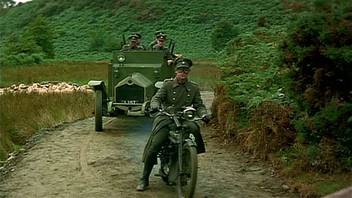 Brough Superior? http://en.wikipedia.org/wiki/Brough_Superior From the look of the colours it is most likely a WW1 era Triumph. Triumph Model H as built from 1915 to 1923

This scene was the reenactment of the assassination of Michael Collins; the Commander-In-Chief of the Irish National Forces who was shot by Denis "Sonny" O'Neill during an IRA ambush at Beal na Blath in the County of Cork on the evening of the 22nd August 1922. O'Neill was a former officer in the Royal Irish Constabulary who previously served in the British Army as a marksman during the First World War, he returned to Ireland in December 1918 and joined the ranks of the IRA. During the Irish War of Independence of 1920-1921, O'Neill was assigned as a training officer to the IRA Southern Command based at Mallow in County Cork where he met Collins serval times and later during the Irish Civil War of 1922-1923, O'Neill join the IRA Anti-Treaty Forces Cork Branch and was in the position when the Anti-Treaty Forces ambushed Collins' convoy. It was believed that O'Neill killed Collins on orders of Eamon De Valera as O'Neill was granted a military officer's pension by the Irish Government (under De Valera's rule) in the 1940s, while it's believed that Collin's death was a coincidence. 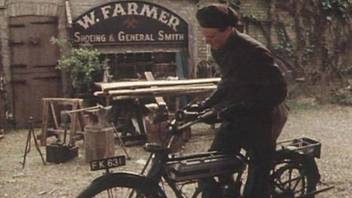