The final drive was via chain. 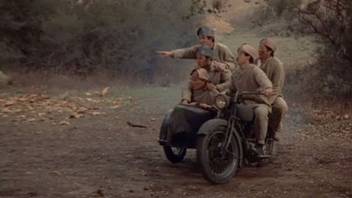 Wasn't sure which pic to use or how to classify it. When we first see this motorcycle in the series finale, "Goodbye, Farewell and Amen," the five-man Chinese band is using it and it has a sidecar. But then B.J. paints it yellow, detaches the sidecar and when we last see him, he's riding off into the sunset on it. 1st thumb second row big single cylindre than supposingly HD WLA V2 flathead at least two bikes were used than andrepa, if I can get correct makes and models on both motorcycles, I'll make separate pages for them. I haven't worked out just what the bike here is yet - I am fairly sure it is all one bike - but there is no Harley WLA to be seen. In all of the pictures the front brake is on the right - on the WLA it is on the left - and the forks don't match the WLA. Also the hand gear shift is on the right whereas the WLA shifter is on the left. I don't think it is anything British. Could it be another Indian, like the red one in ep. 10.13? /vehicle_842872-Indian-Model-741-1941.html If you compare the profile views of the two bikes; e.g. the third pic on the lower line of thumbs on this page with the third thumb on the Indian page, there are noticeable differences. Being used by Chinese would suggest a Dnepr M-72, but that looks nothing like an M-72. That engine looks like a V-twin, not a boxer. A sidevalve single with inverted handlebar levers? The jockey shift is the wrong side to be a Harley AA or BA and the RHS chain drive eliminates most British stuff, suspect German or slightly further east, Russian is doubtful. Well actually, Dnepr is Ukrainian... (Yes, I know the Ukraine was part of the USSR as well) I'll rephrase that to Soviet rather than Russian. Having a hand shift means mid 30's at the very latest, a clear shot of the crankcases would help. NSU 501 TS.

That'll do nicely thanks.