The Kawasaki ZX900A is a in-line four, four-stroke sport touring motorcycle produced between 1984 and 1992. 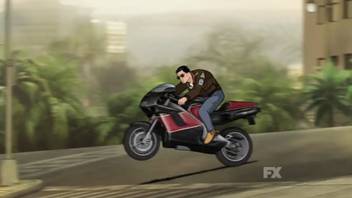 Personally, I hope they make an actual remake of Top Gun. you deserve face slaps for that !!! you think utterly retarded Hollywood of this days would actually use some great soundtrack and actual REAL jets ??? that's the things which appeal most about that movie today they would use some shitty CGI for flight scenes and some soundtrack which you forget the next week completly Did you not watch the Archer parody/remake of Kenny Loggins' Top Gun music video that I posted on the main page? The "they" I am referring to is the production team of Archer. What I meant is that I hope they make an animated remake of the whole movie like they did with the music video/trailer. I thought you want an remake of the original Top Gun movie which would be as utterly pointless and moronic as possible the likes of TOTAL RECALL showed how mediocre Hollywood handles remakes of films which do NOT need a remake to start with Oh God no. Who the hell wants remakes of movies that were good to begin with? Hollywood who is often completely clinicly dead in terms of ideas you know now they are remaking ROBOCOP , but of course tuned for far less violence and more idiotic for the dumb masses Not a Kawasaki GPZ900R. Also, nNot a perfect CGI image but appears to resemble a mid-90s Yamaha FZR 1000. Most definitely not a GPZ900, although that is the bike from Top Gun that Archer seems to be trying to emulate. The colors are all wrong, but that tail section and headlight arrangement strikes me as a Honda NR750. http://www.vsource.org/VFR-RVF_files/Brochures/NR750-2a.jpg Yeah definitely an NR750, single-sided swingarm and everything. 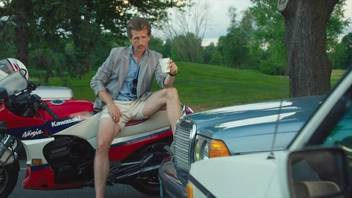 1984 type is GPz 900 R while Ninja is trade name only this is the A1 while Tom Cruise had an A2 in TOP gun difference is '84 US color sheme Link to "image.motorcyclistonline.com" /vehicle_6406-Kawasaki-GPZ-900-R.html /vehicles_make-Kawasaki_model-Ninja.html trade name Ninja is used on technically very different bikes like GPX and GPz 600 750 900 etc. so it is quite inconvinient to list it as Ninja, only because of script on bike, while in documents it is named GPz 900 R A1 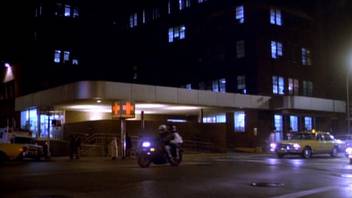 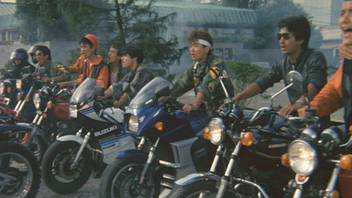 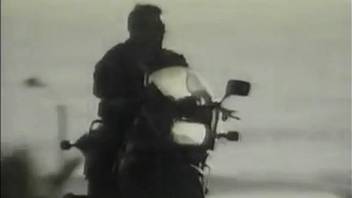 Berlin: Take my Breath Away 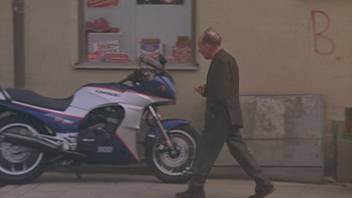 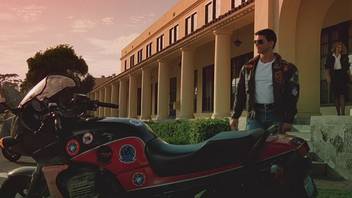 People in Europe think it's a Gpz 750r, because that color scheme is what GPz750r's had in Europe, and GPz750r's in Europe were exactly the same as 900r's, except for having a de-bored engine. We in the USA did not get 750r's imported here (in this body style). The 85 model 900 Ninja's here were available in this color scheme. The rumor is that Tom Cruise wanted/needed a smaller bike, because of his small stature. That's how the 750 myth got started (along with the paint scheme mix up's). But the GPz750r and the Gpz900r are physically the SAME size. Why would the studio IMPORT a 750r for Cruise when 900's, which were the same size as 750's, were readily available? updated photos with better resolution ones: Almost but not quite ... the film bike's paintscheme was one that was used exclusively on the 750s - you simply won't find it on a 900, in any market. ever think that its custom? im sure that they had at least a straight black version and had a red stripe put on it... you might be right but who knows. 900R, did you not read what I wrote (and you quoted)? The site is gone now, but the folks of gpz900r.org (myself included) had a discussion on this since I've last posted here.

Somehow, the guy WHO SOLD THE BIKES TO THE STUDIO AND HAD THEIR PAINT SCHEMES ALTERED chimed in, WITH A COPY OF THE RECEIPT AND PHOTOS OF THE BIKE BOTH ON AND OFF THE SET. Like I said, the site is dead now, but I can assure you that the two bikes used by Paramount studios for this movie were bought from a dealer in California, whereby their paint schemes were changed and the Kawasaki emblems removed (this done because Kawasaki would not provide the bikes free to the studio). Their wheels were also painted black at that time. This guy has a pretty accurate replica (and did a ton of research)

http://mikandersen.dk/Motorcykel%20engelsk.htm two pictures more The bike in the movie is a 1985 Ninja 900 (ZX 900 A2). Don't know about other markets, B-house, but you are mistaken. I've owned the same bike since new, and the black/red/silver paint scheme is correct for 49-state US models. Top Gun bike appears to have dried salt spray on the middle fairing, obscuring the color. That is all. Yes, my bike!!!:-) What do you think, that people in Europe think, it is a GPz 750?!?! Your words are true, but we know very good, which bike is it!!!:-)) Hi http://mikandersen.dk/Motorcykel%20engelsk.htm The proof to back up my statements: Hi Guys Do any of you have a link to a website that I could get some of these photos of the bike from the movie or behind the scence from the movie to print? Behind the scenes or out take pics would be great. Many thanks. I don't know where scott19's pictures came from but you're welcome to copy them. Ok I do that thanks Owned by a member I would love to speak to the owner of the Top Gun bike - does any one know how I can get in contact?? Thanks!! I can confirm and beat ALL known sources regarding if it was a 750 or 900 cause I asked Tom himself when he was in Sweden last week (2012-12-11) to promote the new movie Jack Reacher. I handed over my GPZ900R workshop-book for him to sign (I got a black -90) and after some chatting back and forth about the bike he said that he had the 900, END OF STORY 42.54 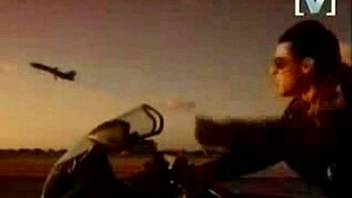