The Indian Prince is a single cylinder, four-stroke sport motorcycle produced between 1925 and 1928.

The final drive was via chain. 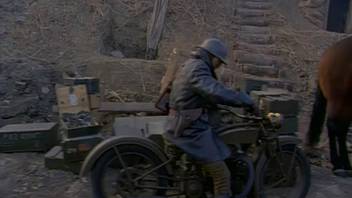 Does anyone know his nationality from his clothes? (it becomes easy to identify ) ...anyway this bike seems late '20s or early '30s, a little young for this movie. Was reported as a scene in Verdun, France, in 1918: Link to "imcdb.opencommunity.be" Thank you, I'll check it further Not a German, guessing from the helmet. The helmet in the pictures looks rather French (a little fireman-like, with something like a little crest on top). Thanks to your information First of all, I concentrate to french When we have to identify military clothes it's "la fin des haricots". French expression that mean something like "end of the world". Yes, it's sensible to be a french military biker. The helmet is typical of the bikers, in the beginning of the 20's century. But that does'nt mean that it's a french bike... Deep meaning expression ...It's not found easily...picture of engine looks like JAP500cc (typically, widely used engine) You won, Bebert! I checked & think it's Indian Prince (1926-28 later model, with some modification) http://www.muzej-motociklov.com/museum/exhibit/sl4/indian_prince.jpg http://www.photos.indianmotorbikes.com/25-28prince/pr004.jpg Second picture (close up of engine) is another bike, may be third picture's background bike. It can't identify yet, where is jplemoine!? Well done, as usual ch.08:

Not convinced this is an Indian Prince, this is a twin port motor, both versions of the Prince (SV & OHV) were single port motors. Not convinced about the other bikes either.