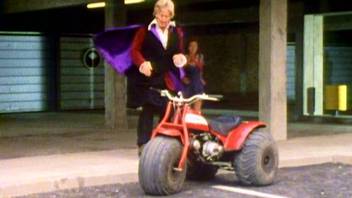 While escaping the Dalek tower block in episode 3 of "Day of the Daleks", the Doctor and Jo Grant get on this trike, conveniently parked outside. A brief chase ensues, with the Ogrons slowly running after this not-very-fast vehicle, until the Doctor runs it into a very small ditch. Jon Pertwee was a keen car/bike/motorboat enthusiast and mananged to get action sequences involving different kinds of vehicles put into a number of episodes during his tenure in Doctor Who.

Jon Pertwee's 3th Doctor on a trike that is just freaking glorious http://www.youtube.com/watch?v=Ap4CD5ZkW_Q 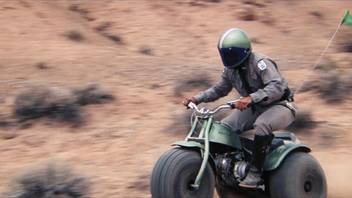 Looking at the forks [https://www.cyclechaos.com/wiki/Honda_ATC90 Honda ATC90] What the heck is up with the tires on these? There hardly aren't any rims, unless these are flotation tires.....?????

These bikes chase after Bond in the moon buggy. Bond manages to jump out of the buggy while they are still chasing him, and knocks one of the riders off, takes the bike and escapes. They are not flotation tires. they are bigger and inflated with more air to produce some leeway so the bike would not flip over entirely if it took a hard turn. Also the wheel provide good traction in rough terrain. Some poor guy in my town flipped one of these and broke his spine.

Okay. Man that sucks is that guy okay or is he permanently injured? Were these 3 or 4 speed? And did they Have high & low end? he is now...but she cant do gymnastics like she used to 1970 was first year for 3 wheeler for honda, so I say 3 speed until at least 1974 the bike uses a 90cc engine and sits on 22inch tires inflated to a low pressure...the machine can climb a gradient as steep as 35 degrees..the tyres are standard to the bike. Did this person have a sex change as well?

Does anyone know the specific metallic green color of the Honda ATC 90 trike ? Was it a Ford color, perhaps to match the Econoline vans used by Whyte Techtonics? 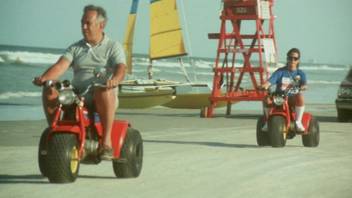 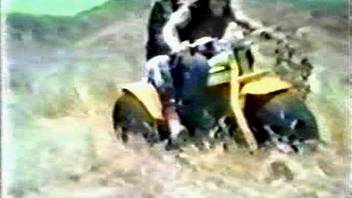 Marriage and Other Four Letter Words