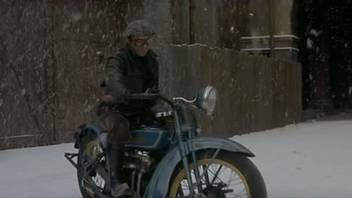 Not an Indian. This is a four cylinder Ace from about 1924-5. Please enlarge the two thumbnails and "Indian" is very clear. The 3 pics are from same scene, but the bike that we see through the window can be an Indian and, later, becomes an "Ace" (main pic) I don't know the exact details but somewhere in the 1920s, Indian bought out the Ace company and the Ace Four became the Indian Four. The fact that this bike is blue suggests it could be from the transition period. Perhaps some research to do. Ace-Henderson? Extra enlarged two pics. At least in gas tank is written "Indian". Comments? From what I can gather from this http://en.wikipedia.org/wiki/Indian_(motorcycle) Indian bought the rights to the Ace Four and marketed the bike as the Indian Ace for one year only, 1927. I have not seen a blue Indian before and can only assume this is a 1927 Indian Ace. More stuff here maybe - haven't read it yet. Link to "blog.motorcycle.com" Standard colour for the ACE was Blue with pale yellow rims. Indians of the period were by and large Red. When indian marketed the Indian/ACE 4, they used a large Indian script on the tank with a smaller ACE script underneath that. The Script on this particular bike appears somewhat larger than normal. You COULD get an Indian in other colours but it wasn't more common to do that until after WWII. Remember, this is a MOVIE bike. The Studios at the time didn't rely upon collectors and car agencies to procure "period" vehicles for productions. They had people on the lot procure vehicles, they fixed them up and afterward either kept them in inventory or sold them off to workers at the studio. IF this bike was original (and at the time of the movie production would have been 40 years old give or take - not that long a time since it would be like finding a 1967-68 bike now) Could be that this particular bike was built up from ACE stocks after Indian took over ACE and someone - a dealer, the owner whoever - applied the Indian name to it. Either that or a studio mechanic repainted it and didn't do it exactly correct. It happens. I've seen PLENTY of bikes with the wrong tank emblems for the year of bike...ESPECIALLY with British bikes and many HD's where the owner liked the 1950 HARLEY DAVIDSON chrome script rather than the mid '70's AMF/Harley one that was on the bike originally. My opinion on THIS bike? It's an ACE no matter that the tank says otherwise. Indian headlights and mountings never looked like that and i think the colour combo gives it away - ESPECIALLY the rims.

I don't think it's an ACE or an Indian at all. The shape of the frontfork and mudguard (look at the supports at the front of the mudguard and the way the mudguard covers the fork instead of a "dent" where the fork goes over the mudguard like with an ACE), the design of the frontbrake (only on the 1928 model DeLuxe, ACE never had a frontbrake) and the long exhaust manifold (all the way down under the footboard in stead of over the footboard) indicate this is a 1928 Henderson DeLuxe. 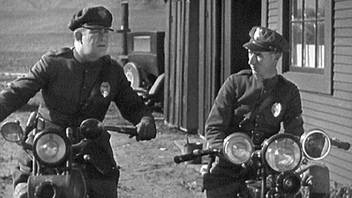 Bike on the right. May be it's new make on IMCDB Henderson De Luxe (1927-28) 4-cylinder high speed persuiter. Small mark on the fender is a trademark. http://socalamca.org/2k2mc-show/006.jpg Yes, it is a new make 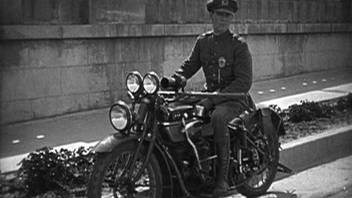 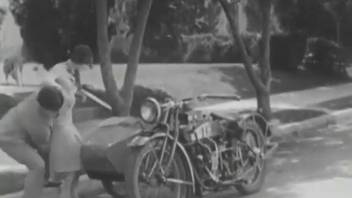 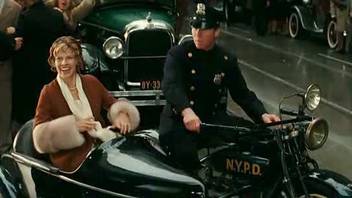 Studebaker 1925-27, probably the smaller standard six. It's for the bike. Indian? this for NY?

Henderson Deluxe, model as built from 1925 to 1928. Sidecar looks too modern to me. Definitely not a Henderson sidecar, maybe a modern Champion Legend? 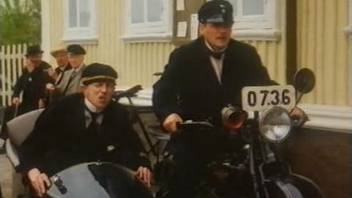 Ace Four circa 1926. I think the year is about right (it could be a little earlier), however it is not an ACE, but a Henderson Deluxe. You can tell from the shape of the inlet manifold. The Henderson has a four way cast aluminium manifold, whilst the ACE has a two way manifold, because the cylinderheads are grouped in two pairs with a combined intake channel each. Also the font mudguard and mudguard support are Henderson style, not ACE.

Non-valid license plate O736. O = Göteborg och Bohus län. In my books from 1958 and 1961 this number belonged to a 1954 Volvo bus registered in February 1955. No car, truck or bus had this number in my 1954 book. This might still be the old original plate since motorcycles had their own number series they could have the same number as a car.