Harley-Davidson U in Movies 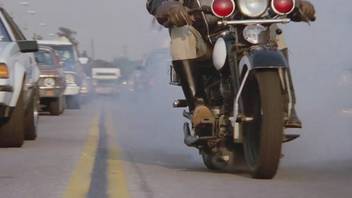 Is that a Fiat (the black car) (132) La bleue devant? Une VW Karmann-Ghia typ 14, et derrière (la noire) une Fiat 131. Mais là; on recherche la moto. Que ça serait une vieille Harley-Davidson (style Panhead) que ça m'étonnerait pas... I will see if there is a better view of the Karmann-Ghia. I guess the Fiat is worth its own listing also. edit: Nothing more visible of the Karmann-Ghia so probably not worth listing. The Fiat was a 131 Super Brava(US-spec's 1978 131 Supermirafiori),1979-1980 the Fiat 131 needs it's own listing ! i agree Maybe use the pic for the 131 then, and use one of the two other pictures pictures for the bike? Harley-Davidson U (1937-) ...far but seems prewar model. edited The main picture was the only one were the side of the bike is shown in full, but now that it is identified, I have used another larger picture for the bike and the Fiat is being listed also as suggested. Yeah, Its an old Flathead Harley police bike. Fits John Candy's character perfectly The white car next to the motorcycle looks like a 1982-85 Toyota Celica 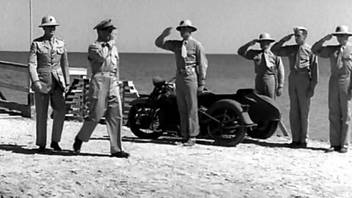 Harley WLA ??? Harley Hydra Glide? The Hydra Glide was first seen in 1948-9, called so because it had telescopic forks. This is probably a WLA as they were first seen about this time - 1942 - and built in large numbers during WW2. There is a chance it is an earlier model from which the WLA was derived. It's not a WLA because of the position of the head light. WLA's have the head light lower, under the horn. Also the shape of the front mudguard and front fork look more like the ones used on the big twins, so I think it's a 1937-41 Harley Davidson U or UH

Another one in a later scene: 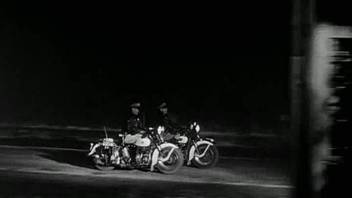 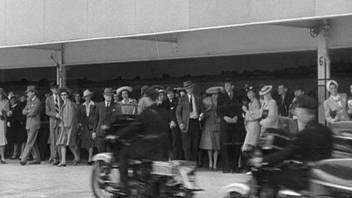 Shadow of the Thin Man