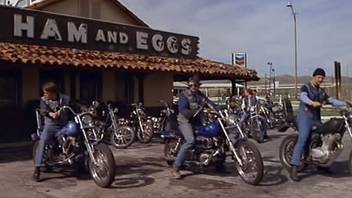 blue one in the centre another Harley.. The black one on the right looks like a Yamaha twin. 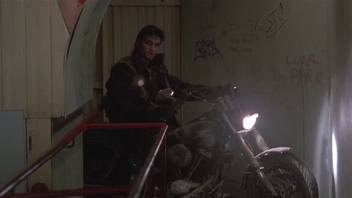 Shovelhead wideglide...early 80s The bike in the PUNISHER was based on a 1974 Shovelhead Harley Davidson. Two identical bikes were built for the film by NATLI motorcycles in Kingswood, Sydney. No longer in business. Paul and Manuel also seviced the bikes during the film and provided 2 custom chev powered Jaguar cars as well. They did a great job. S&S carb, 2" belt drive primary drive, Triple disc brakes, raked, stretched and lowered. At the end of the movie, the Stunt Coordinator bought one and I bought the other one. I rode it for 8 years then sold it. Not sure what happened to the other bike, but I think it was wrecked.

Tecnically not a Wide Glide (FXWG) if the build history above is correct, model wasn't introduced until 1980, this is more likely a modified FXE Super Glide.