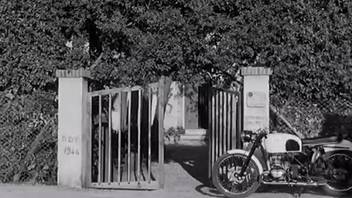 In the movie they took the engine sound from a Moto Guzzi Falcone. I don't think this is a BMW, period Beemers had a plunger frame, this looks like swinging arm (shockers canted forward) also, it's chain drive. With those weird forks and kidney shaped rocker covers I think it's a Douglas, can't find an exact match. I don't think it is a Douglas, the frame is wrong. The picture is very small but I don't think the valve covers are a match for Douglas either. The small headlight suggests something Italian. Now just have to find which Italian maker did flat twins in that era. The valve covers look BMW-like. The tank could be from a much later BMW - not going to happen. I wonder if this is some sort of Italian customised BMW. The engine and forks do bear a resemblance to the Douglas Mk V which preceded the Dragonfly but the frame doesn't match.

Definitely a Douglas, compare front forks/hubs It's either an 80 plus or 90 plus, modified rear suspension & different tank/seat. 25bhp @6500rpm, quite a little rev monster for the early 50's. 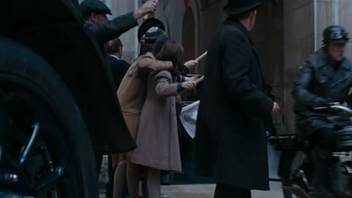 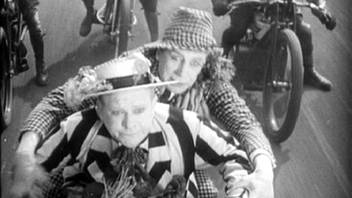 The bike on the right of the main picture is a Douglas.