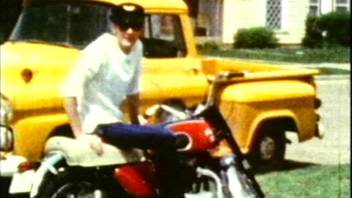 also seen here:- /vehicle_192691-Chevrolet-unknown.html Looks like another Triumph Bonneville. This is a BSA from the mid-1960s. It isn't a BSA (and definitely not a triumph) at all, it's an Ariel cyclone as purchased by Buddy Holly from millers motorcycles, a Triumph and Ariel dealership after the local Harley dealership refused to sell him and the rest of the Crickets Harleys, not believing they had the money.A rare bike. Ariel Cyclone is definitely correct! This is important to know (if you believe pointless trivia is important!) because it's become a part of Buddy Holly lore - AND - his bike is a pretty cool and not-too-well-known model. In other words, Buddy didn't buy just any old bike. I risk being a bore but here's the poop on that bike: Buddy and the Crickets were indeed ushered out of the Harley dealership, the sales guy thinking they were just some time wasting kids wanting to sit on the bikes. Little did he know they had pockets full of hard cash! Off they went to the next showroom; a British bike shop. The owner's wife - though and older lady - was reportedly a pretty hip old gal and recognized the guys. They were given good treatment and bought three bikes that day - all cash sales. The other Crickets bought Triumphs (they'd all just seen The Wild One, so who can blame them!) but Buddy liked the look of the Cyclone. Ariel was soon to stop making 4-stroke bikes. By 1960, all of their output would be fairly modern (for the time) 2-stroke twins. That was a pretty daring move for a British motorcycle maker, if you ask me. Their bread & butter had been 4-stroke singles and twins for decades! Maybe the brass at Ariel knew this and decided to send their "650" line out with a bang when they introduced the Cyclone in '58. Mistaking it for a BSA is quite understandable, since Ariel was owned by BSA at the time and the parent company chose their "A10" motor to power the 650 twin when it joined the Ariel lineup in the early fifties. Ariel needed something to bridge the gap between their 500 singles and twins and the famous and mighty 1000cc Square Four. This model was the Huntmaster. Not a particularly sporting bike and a lot of them were saddled with a side car. This was pre-Mini England, don't forget - so a lot of family men drove side car outfits before the advent of the "economy car"! Google any picture of a late fifties Ariel and you'll see that the frames, forks and sheet metel parts look just like Buddy's Cyclone. So that was the recipe...Ariel cycle parts and a thinly disguised BSA mill. But the Cyclone is quite a bit more special than the "standard" Huntmaster. Ariel specified not only those nice chrome fenders (from their HS & HT model)and the eye-catching, model-specific red & black paint scheme but a hotter engine as well. Cyclones came with what was essentially BSA's Super Rocket tuning, which means they had high compression pistons, the hot cam and (I think) bigger valves. This puts the Cyclone one notch below the highest performing bikes of the day. If only they'd found a twin carb head in their parts bin! All Cyclones were built in '58 and those not sold in that year were sold as '59 models. They were all intended for export; I've read that only one got to stay in England, with the rest destined for the U.S. and Canada. The Aussies may have got some too, as I know one shows up at Australian vintage bike meets. Cyclone output is believed to be no more than 200 units and there are maybe 20 or so accounted for world-wide currently. This is an extremely rare motorcycle! For much more information on 1958 Ariel Cyclones E-mail me at arielcyclone@hotmail.com Regards, SANDY Buddy Holly's 1958 Ariel Cyclone CNLF4510 HC8 appears to be the 3rd Cyclone manufactured. It was given to Buddy's Friend Waylon Jennings in 1979. My research finds that a maximum of 250 Cyclonesa were manufactured. 1957 and 1958 Ariel Huntmasters can be made to look like a Genuine CYCLONE by adding the sports mudguards and western/High Handlebars. A real CYCLONE will also have the small Lucas # 529 tail light. A real CYCLONE has HC8 under the serial # CNLF _ _ _ _ , on the crankcase. The HC8 40 HP engine could be ordered for the Huntmaster as well, so on its own does not mean the bike is a CYCLONE. MY study of the ARIEL FACTORY RECORDS shows 250 CYCLONES ,,, MAXIMUM ! Actually only 22 note \" CYCLONE \" , and BUDDY HOLLY \'s # CNLF4510 HC8 CYCLONE is NOT one that specifically show the word CYCLONE. THe record for his bike shows \" Star \" engine, \" USA \" high handlebars, Sports mudguards, and Glamour finish. By serial # I think BUDDY \'s CNLF4510 is the 3rd CYCLONE. The Cyclone CNLF4681 , that stayed in England is the Photo bike and did NOT have the 40 HP engine. Of 175 that were definately CYCLONES, 89 went to NEW YORK. 30 to LA, 4 to Houston, 21 to Montreal, 21 to Toronto, 7 to Denmark ( 6 with sidecar gears ) 1 to South Africa, and 1 to Bermuda. CNLF4440 is the lowest serial # CYCLONE and CNLF5955, built June 7, 1958, is the last CYCLONE ! The 22 Ariels that show \" CYCLONE \" in factry records are : CNLF 5414, 5423, and ,4,5,6, 7,8, 5445 and 6, 5454,and 5,6,7,8,9,5460, 5968,and 9, 5470,and 1,2,3,4. As far as I know Buddy and Waylons CYCLONE is with Waylon Jenning\'s estate, In Arizona ? I look forward to when it sees the light of Day !