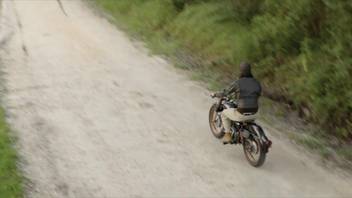 Anything else? Full width hubs suggest something much later than 1945? Not much more, only this one eventually: I think I've nailed it. Early 60's (1962->?) H-D [Aermacchi] Sprint 250. Tail light works, as does the rear mudguard support and yes they did a solo saddle version. I have looked at this one several times and I go along with what the sad biker says. Definitely post WW2, with tele forks, full width hubs and swing arm rear suspension. I thought it odd the suspension units were so far forward and the bike seems to have a lot of ground clearance. Now that the Aermacchi has been put forward it is all clear. I guess this bike dates from before the time when H-D were involved with Aermacchi.

I'd be even more inclined to say Harley, they bought in around 1960?